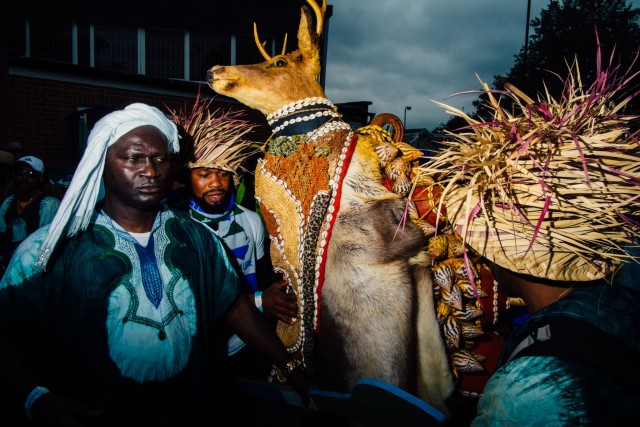 Nobody said street photography had to be limited to pictures of people walking down the street and the Flash The Animals slideshow from the Full Frontal (Flash) Collective proves it! They turned their cameras (and their flashes) on some furry critters and the collective’s epic use of flash pulls the animals out of time and portrays them as ethereal guardians of the spaces in which they dwell. Hit the jump to watch this excellent slideshow!

Torsten Hendricks has done an amazing job of sequencing and presenting the slideshow in way that adds to the images and creates a sense of the collective as a whole without being heavy handed. Really well done!

I reached out to Torsten to ask him a few questions about Flash The Animals and the Full Frontal (Flash) Collective:

StreetShootr: Hi Torsten, tell me about Full Frontal Flash and how the collective came together…

Torsten Hendricks: Full Frontal Flash began with Cliff and Johan who had the idea to start a collective based on flash. They looked for a couple of guys who were flash shooters that each had their own unique individual style. They approached a few people and they got quite a nice collective together.

We all liked shooting with flash in a way and it doesn’t matter if it’s in the style of Martin Parr or more confrontational like Bruce Gilden. The kind of flash photography doesn’t matter. We all have our own style but we’re all drawn to flash.

SS: Flash is like a drug for street photographers. If you start shooting flash it might be all you think about. It’s dangerous!

Torsten: Flash is also difficult because, for example, when I’m shooting close with flash I don’t like confrontation. If you shoot with flash it’s hard to avoid confrontation!

You have to acknowledge that you’re up in their face! You know that you might be bothering them and so might just shoot two or threewherees where you might shoot 20 or 30 frames of the same scene without flash. But people might get annoyed and you know that so you try to move on.

SS: How does the collective work together? How do you interact as a group?

Torsten: We mostly communicate online through private messages and social media like our Facebook group. And we’re always trying to push each other a bit more. The last project with the animals was born from a point where we were starting to talk about it online.

Really we like to push each other and really do something. With any group activity it’s always difficult to get everyone to work together. But the internet makes it easier for us to exchange ideas with each other.

SS: Was Flash the Animals a project that you went out and shot? Or did the group pull the shots from their archives?

Torsten: I remember Clifton talking about it was too hot in Texas so he stayed in a lot and was shooting his cats which are quite amazing if you see them. And then we realized we all had some animal pictures so we put them together in our Flickr group to see what we had.

When you really look at animals you start to see some human expressions in them. So that makes it interesting. You can do something with animals. It’s funny that some people say this isn’t street photography because we’re just flashing them in the face. And we said okay. We’re just shooting and enjoy shooting so it doesn’t matter what anyone else thinks of us. It’s called Flash the Animals because that’s what it is!

SS: What I liked about Flash The Animals is the sequencing and the presentation doesn’t overpower the images. But there’s something subtle added by seeing them as a sequence in this way. I understand you put it together?

Torsten: The editing was done by me, yes. I’m not an expert but for me it’s more about how the images fit next to each other. Breaks can work and you can have nice breaks in each of the series. But the break needs to be on purpose.

It’s easier to do it with your own pictures because you know what you want to express. But when you have 8-10 members then it gets more difficult because you need to see how they’re fitting together and you have to combine all these different styles into one edit in the end. And it has to be fluid.

SS: What’s coming up next for the collective?

Torsten: We’re all shooting and working together but one thing we’re thinking about is improving the website this year. As the group has grown our needs for the website have changed so we’re working on making it bigger and better. It’s a big job and we want to get it right.

SS: I know you’re on vacation so I won’t keep you long, but it would be great to talk to you again about photography.

Torsten: That would be excellent. Let’s do it when I’m back home from my vacation!

The Full Frontal Flash Collective is dedicated to flash photography with a focus on the street and candid situations. Its members like the who’s who of modern street photography:

Many collectives release slideshows of their members work but Full Frontal (Flash) seems to consistently get it right. The presentation never overpowers the images and the sequencing and editing are always on mark. While a slideshow dedicated to pictures of animals might spark some debate about the definition of street photography it’s still a great body of work and an excellent introduction to the group as a whole.

I, for one, am looking forward to the next one!

What’s your take on Flash The Animals by Full Frontal (Flash)? A great slideshow that pushes the boundaries of the definition of Street Photography? Or just a bunch of pet pictures? Post your ideas in the comments below and keep the conversation going!